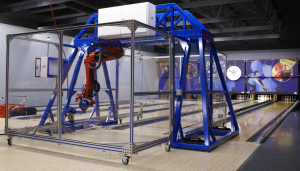 ARM Automation has a long history of building advanced robotic systems for specialized applications including nuclear materials handling, underwater positioning systems and even X-ray crystallographic equipment.  Rarely do we get the opportunity to share the publicity or credit for these systems, but on occasion, we do get the chance to show off our customers and our work.  In 2010, The U.S. Bowling Congress, the national governing body for bowling, approached ARM Automation with a request to develop an automated bowling system capable of reproducing virtually any type of throwing style to a high degree of accuracy.  In their quest to build the ultimate testing platform for balls, lanes and related equipment, the USBC had approached several different machine builders and had evaluated using many off-the-shelf robotic systems to no avail.  It wasn’t until they met with the ARM Automation team that they found a partner who was able to break down the challenges at hand and devise a solution which met all their performance criteria and their budget.

The resulting project was eventually named E.A.R.L. which stands for Enhanced Automated Robot Launcher.  EARL is essentially a purpose-built 7 degree-of-freedom robot and control system which allows for precision motion (+- 2mm) and split second (+- 1ms) timing accuracy which is essential when throwing balls at speeds up to 25 miles per hour.  Given the variables added by different ball masses, ball grip orientations, spin, velocity, release point and throw vector parameters, any given bowl requires specification and execution of up to over a dozen variables.

One of the key challenges of the project was the development of a suitable ball gripper/spindle/release mechanism.  First, each ball must be captured in a user-defined grip orientation (gripper spin axis relative to the ball’s rotationally non-homogenous coordinate frame) and clamped with significant pressure despite small variances in allowable ball size.  To achieve required ball spin speeds of up to 900rpm, a spindle motor system was incorporated into the scissor like gripper apparatus.  Lastly, in order to achieve precise release points while traveling at maximum arm speed, the gripper mechanism needed to open in a manner that imparted no adverse motion to the ball’s instantaneous trajectory and needed to do so in a very tight window of time, +-1 millisecond.  This free-release grip solution required that the clamp forces on the ball be almost instantaneously reversed.  To achieve this function, ARM devised a reversible scissor mechanism which once set closed was held in place by a multi-stage “hair trigger” release.  One set, the clamping cylinder loading was reversed which attempted to open the mechanism.  This allowed a fast-acting solenoid combined with an accurate look-ahead control scheme to release the spindle jaws at precisely the right moment and see that they swung wide and clear of the departing ball.

The resulting solution was so repeatable that it limited its own ability to bowl a perfect game.   During an initial competition against a top professional bowler, EARL’s programmed “perfect throw” rubbed a dry streak on the oiled lane which resulted in progressively decreasing score.  Sorry EARL, it seems that sometimes you can be just a little “too perfect”.